This post is about the past – from the Archives!


We had moved to Macclesfield and Chris was working with a colleague who had a boat.
Also, just down the ginnel lived Sally and John – we had met them via similar aged children at the local school. John had a boat.

So, in the summer of 1990, the plan was hatched to borrow Colin's boat –called Noggin – and set off from Macclesfield in convoy with John and Sally on their boat - called Shed's Gone.


My previous links with canals had been as a boy fishing in the canal near Uxbridge (presumably on what I now know to be the Grand Union) and most recently, using the towpath as a convenient (level) route for training runs.


So, with our bags of gear, we drove to Mr.Massey's Farm where Noggin was moored, complete with key. As we walked along the field edge where was the deluxe, spacious narrowboat that Colin had described, …?

And so we opened up the 23 foot long Shetland Cruiser and piled on board– that is, Mum and Dad, three teenagers and two Collie dogs.


The rest is a happy blur of warm memories as we cruised the Four Counties (with only one rainy day – in Stoke!) 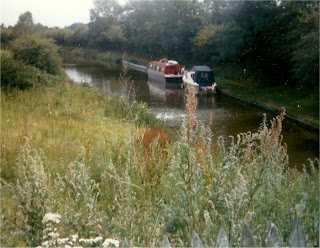 We seemed to have loads of time and got down to the Boat Museum at Ellesmere Port, meeting up with my parents in Chester. 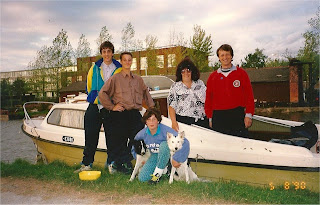 
The following year, the weather was also brilliant and we borrowed the boat on several occasions to cruise up and down the Macclesfield Canal. 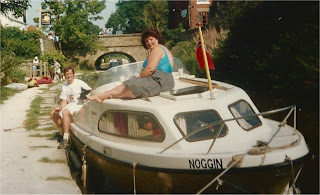 Noggin and Crewe at Higher Poynton on the Macclesfield Canal - sunny days!


And so our love of canals was born – a big thank you to Colin for letting us use Noggin and to John and Sally for 'teaching' us the ways of the 'cut'.

By a year later, both my parents had sadly died and our share of the estate was an unexpected gift – in sad circumstances. My Mother and Father had met us in Chester, all squashed into Noggin and having so much fun. I'm sure they would have approved of our purchase with the inheritance money – yes, you've got there – a narrow boat!