We had planned to meet up with our lad Daniel and our granddaughter near the surfing beach at Croyde, North Devon - and found a delightful Caravan and Camping site just outside Braunton.
We have been coming to this area of north Devon since we first got married and lived in Exeter and then in Tiverton. We have brought our children in turn and now our grandchild! 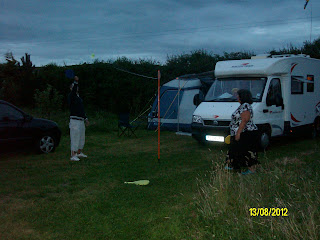 The main reason for coming back to Braunton was to be close to Croyde surfing beach. Despite variable weather, we managed to get 3 days on the beach – 2 great sunny days and one at times sheltering from the rain!
Even so the beach and sea is magical and the surf improved during the week to be crashing in on our third day.
On one of our beach days, the local RAF Rescue Helicopter was much in evidence.
Flying out from the local RAF Chivenor, it was just offshore, lowering it's winch man. We weren't sure if it was a rescue or an exercise?
Later, it dropped a red flare into the sea to mark a swimmer way out. The beach RNLI jet ski went out and brought a swimmer back in. 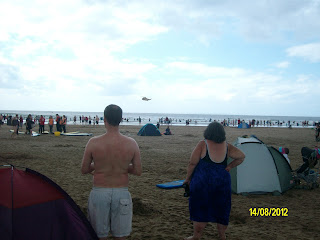 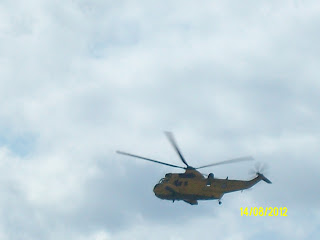 Later, a RNLI Lifeguard told me they had made 20 rescues that day, including 2 people who needed to go to hospital. You can see why as the swimming area was packed with bodyboarders and the surf was crashing in. Collisions were inevitable.