Since buying our boat in 2003, we have had three different tunnel lamps.


The first was a heavy lamp, possibly a search light type. The switching system was housed in the back of the light and had siezed, so I had by-passed it. However, the reflector and bulb holder were also bady corroded and when embarrassed by it's intermittant working, I eventually decided to replace it. 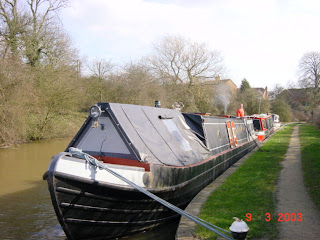 n.b. Song of the Waterways in March 2003, just after we had bought it. Here moored at the late Geoff Dennison's berth on the North Oxford Canal. Note the tunnel lamp has a bow mast light. Here I am running the engine for the first time? Also, note the boat came without a bow tip fender – we ran down to Braunston that Easter to get fitted up with fenders and ropes by Pete at Tradline Rope and Fenders.
So in August 2009, I went the route of economy and bought a car spotlight!
This time mounted direct onto the front cratch board. 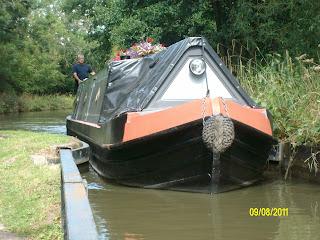 Coming down the South Stratford Canal.
First long cruise since retiring.
The car lamp was always an interim measure. So via the amazing e-bay, Chris sourced our third and current tunnel lamp.


This is a Butler spotlight, probably off a Massey Ferguson tractor, although I've seen a reference to them being used for the Ford Popular car.


When up on the Leeds and Liverpool last summer, Adam from PB Mechanicals mounted it with new wiring and re-paint to look a simple, understated and yet effective lamp - much more in keeping with the age and style of the trad. 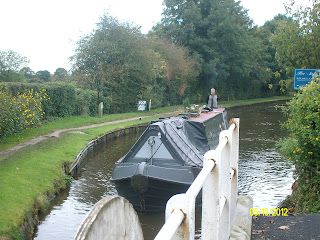 Coming through Fool's Nook Swing Bridge, doing the 'long' Cheshire Ring due to the breach at Dutton – October 2012 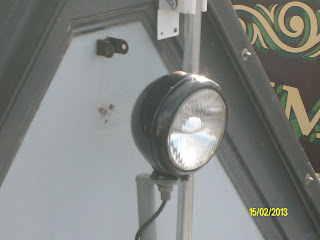 Close up of the Butler lamp – with the old light fitting/holes still in place!
Posted by Unknown at 06:44