Onto the North Oxford Canal July 2016

Up early to the Atherstone Launderette to get towels and sheets washed, even more shopping in Aldi and then ready to set off again.

[For anyone travelling the Coventry Canal, I will recommend a stop in Atherstone, below Lock 5. Good TV and WiFi/mobile coverage, shopping and real ale pubs!]

We joined a short queue of boats going up the Atherstone flight though stopped after Lock No.5 to take on a full tank of water. Having eased into the services to sort the rubbish and toilet, it was onwards - southwards on the Coventry Canal.
Always interesting, the winding route passes echoes of it's industrial past with old wharves and derelict colliery arms. Partly rural and then through Nuneaton!

Chris takes the boat up the locks in 'summer' mode 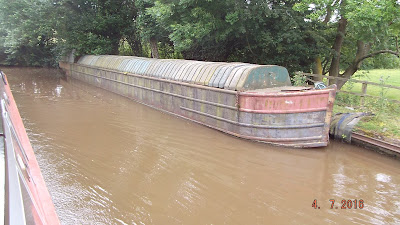 Passed this rather forlorn working boat - still with it's interlocking blue covers made of fibreglass - is it a River Class British Waterways boat from 1959? 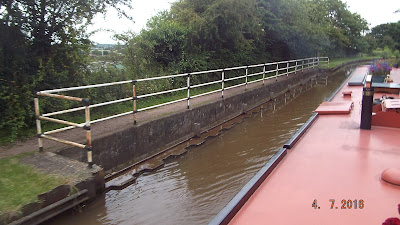 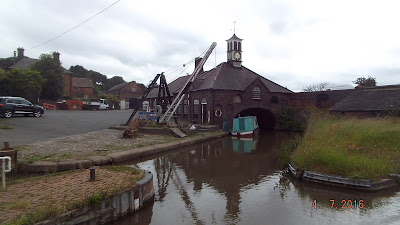 The classic BW Yard at Hartshill, looking less cared for! 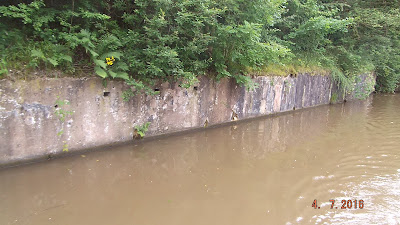 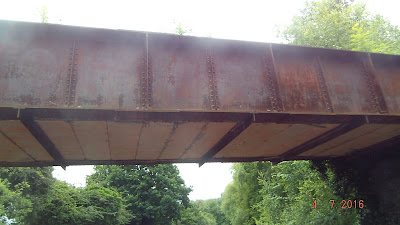 More industrial heritage - this bridge is No.28A, the 'A' meaning an addition after the canal was built. The bridge carries a rail track to Hartshill Quarry which seems to have been still going in the 60's, although I'm not sure when it closed. 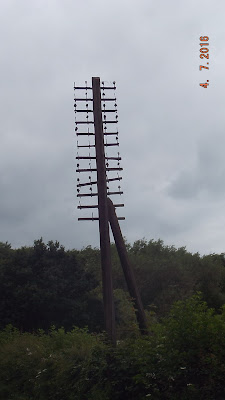 Another legacy of times past - a full head of telephones wire brackets. The telephone wires followed the canal as an easy route/access from town to town. 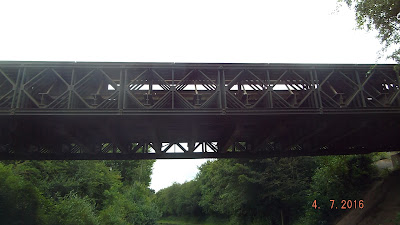 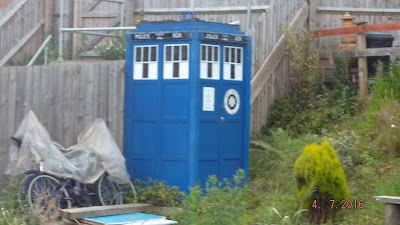 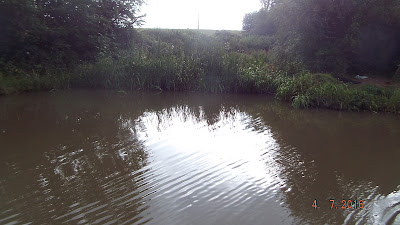 The reedy entrance to the long abandoned Griff Arm to Bermuda. Opened in 1787 by Sir Richard Newdigate, it brought out local coal, bricks and stone to the main canal. 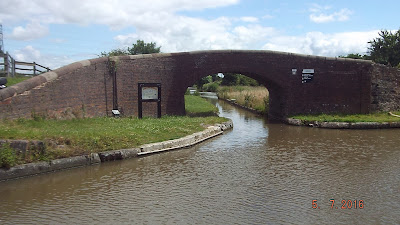 Having had a quiet mooring, the next day we passed the understated entrance to the rural Ashby Canal - we've not done this yet? Next year perhaps? 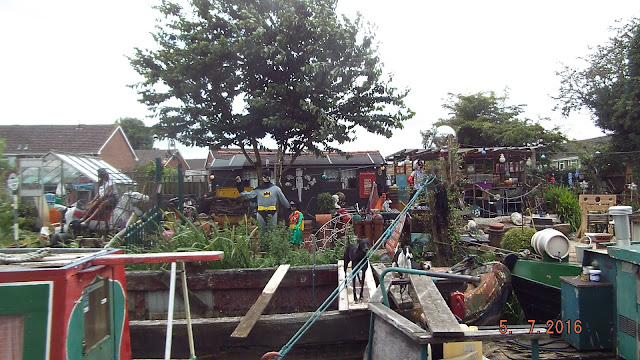 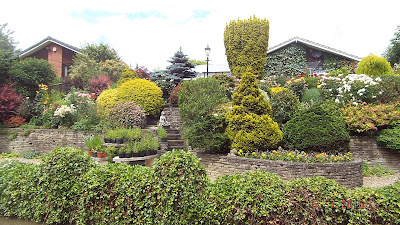 Contrasted with a superb rear garden 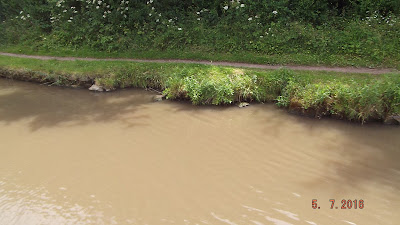 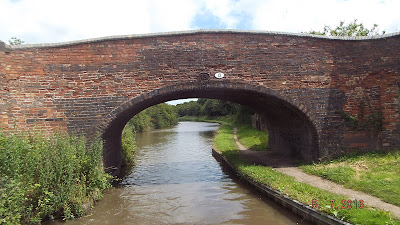 Solid brick bridge, No.13, is testament to James Brindley's 1769 canal building. In fact, his robust structures drained the available monies as the canal got to Atherstone - and he was eventually sacked as the engineer! 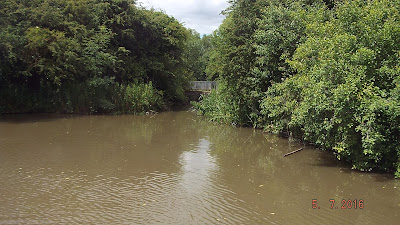 Another abandoned arm - this one went to Newdigate Colliery Basin, nr Bedworth.
Newdigate Colliery first produced coal in 1901 and through in 1940 employed 1360 miners producing 500,000 tons of coal. This was transported both by canal and rail. 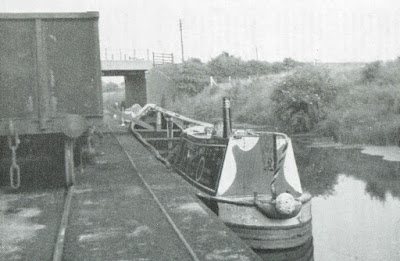 With thanks to Peter Lee 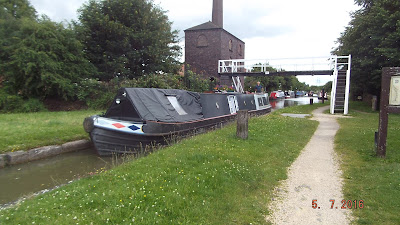 The Captain takes the helm through Hawkesbury Junction, where we turn onto the North Oxford Canal at a notorious U-bend!
See the Engine House in the background - built in 1821 with a Newcomen steam engine, pumping water out of the local mines to supply the canal 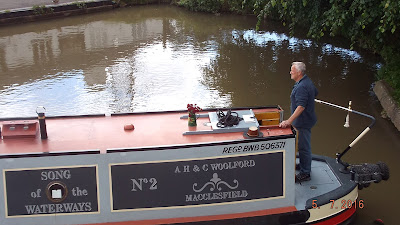 A study in concentration! 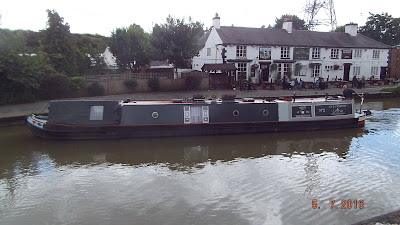 Success! Outside the Greyhound Pub, watched by sightseers (and fellow boaters!)
This junction was completed in 1803, after a lengthy dispute between the proprieters of the Coventry and Oxford Canals. The levels between the two canals ended in a 7 inch fall from the Oxford, so we go through a stop lock!
This Stop Lock is called Sutton Stop by the old boaters after a family of lock keepers for many years in the 19thC. 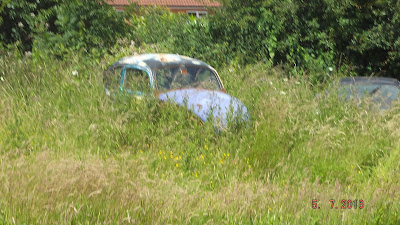 This derelict Beetle is still here - you would have thought there would be money on selling it on to an enthusiast? 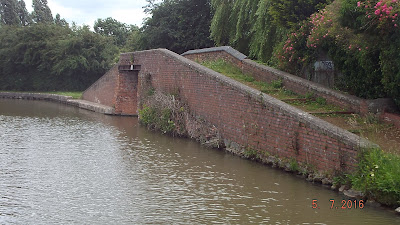 The towpath crosses the entrance to the Wyken Arm.
This has a significance for us as it was the first destination in this boat in March 2003 to wind (turn) the boat having just bought it! 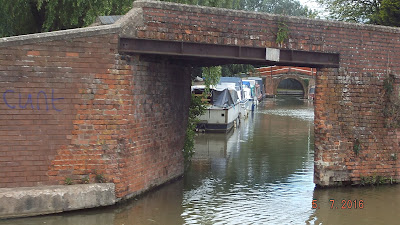 Looking back through the Arm entrance 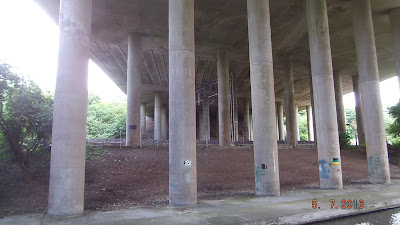 My creative streak - I'll call this - 'Pillars of Modernity'
Under the M42, with the electric gantry just showing for the West Coast Line 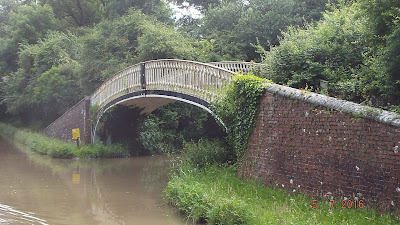 Back to the 1830's when the North Oxford was 'modernised' - here one of Brindley's contour loops goes off under the Horesley Iron Works Bridge.
We go straight ahead, through a cutting