To Atherstone in Warwickshire June/July 2016

With weather improved, we set off to Fazely Junction, chugging away.
This is a long pound with no locks - though of much of interest.
The initial section was built by the Grand Junction Canal (now the Trent and Mersey) in clear determination to link towards the coalfields of Bedworth and Birmingham.
Although we now call this the Coventry Canal, it was built by three different canal companies! 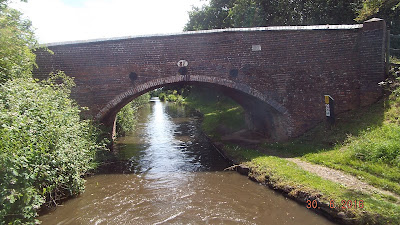 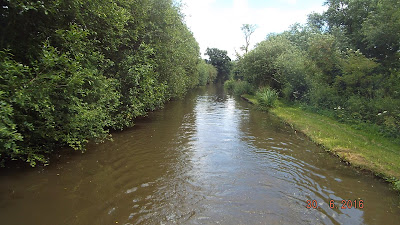 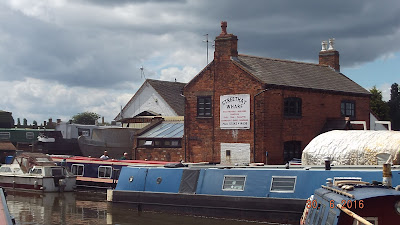 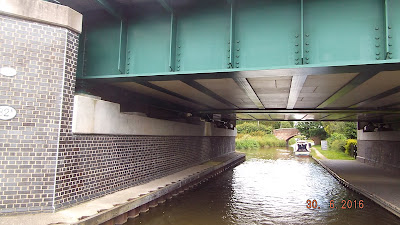 Passing under the new Network Rail Bridge 82A at Huddlesford Junction. This line was improved to a 4 - track route which meant new or additional bridge construction.
It carries the West Coast Main Line from Euston to Stafford, Crewe and the Glasgow 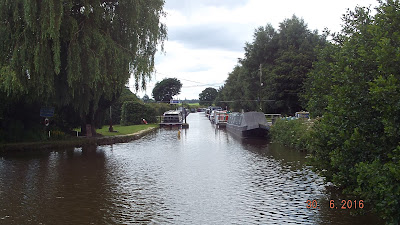 Looking up the derelict Wyrley and Essington Canal (the Lichfield section) 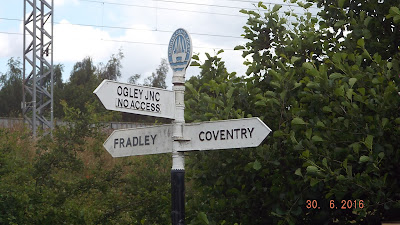 We are on our way towards Coventry. 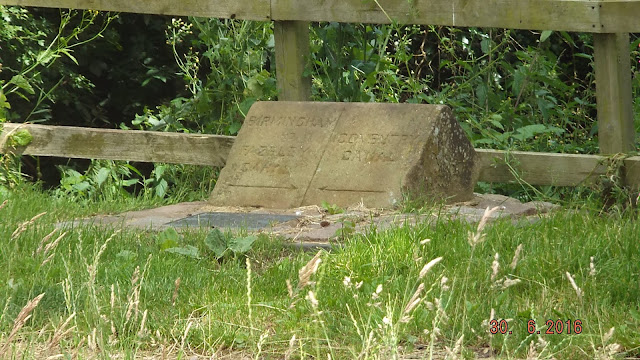 This carved stone shows the joining of the Coventry Canal to the section built by the Birmingham and Fazeley Canal (1789), here in Whittington 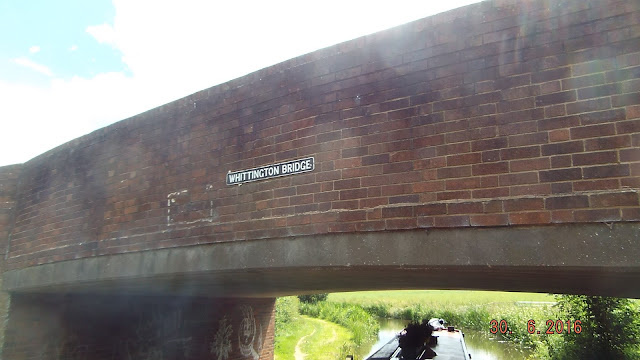 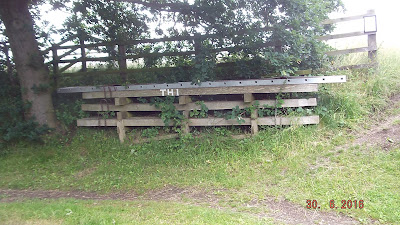 A stock of robust timbers to drop into a groove at the bridge as a stop plank - either in an emergency breach, or for a planned draining of the pound for maintenance work 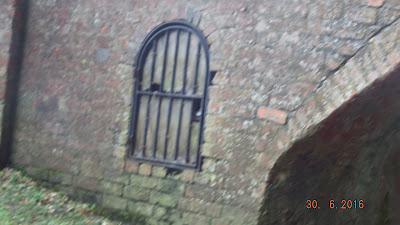 No, not a jail! This is where the stop planks used to be kept 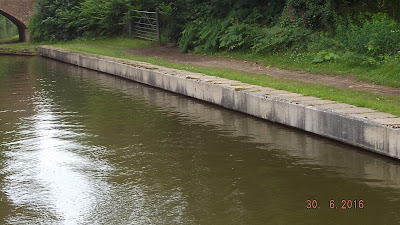 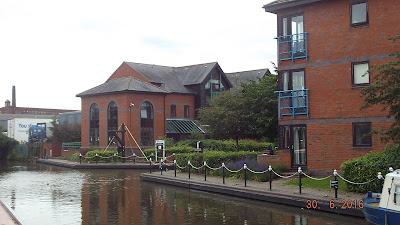 This is Peel Wharf - the left side are the Canal and River Trust Regional Offices.
We moored for the night just opposite on good moorings (poor TV signal though!) 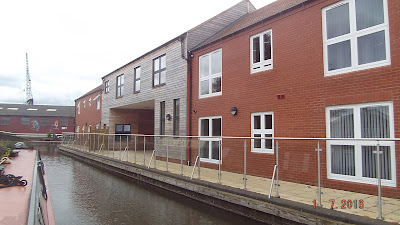 Next morning, heading to the Junction - some new waterside housing, with large glass panels as a safety feature (and to keep the ducks/geese out?) 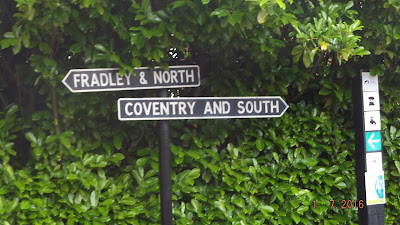 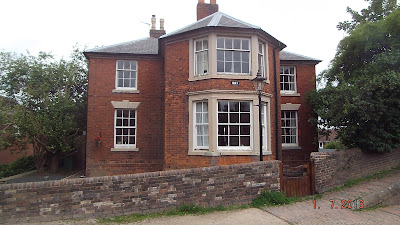 The grand Canal Company House at the Junction, with good line of sight along the canal and opposite the route towards Birmingham 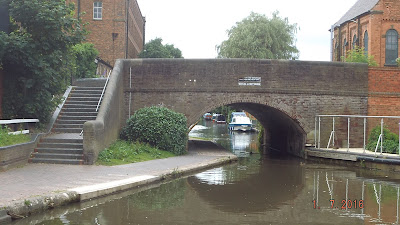 The route on the Birmingham and Fazeley Canal to Birmingham 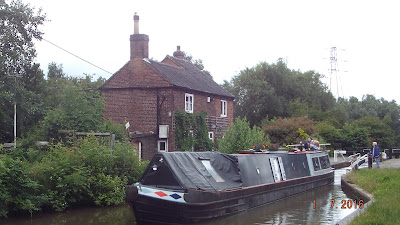 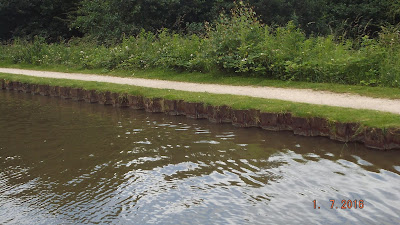 This type of rusty yet solid steel shuttering tells me this is an area of subsidence - from the coal mining activity that took place around here. Now a country park. 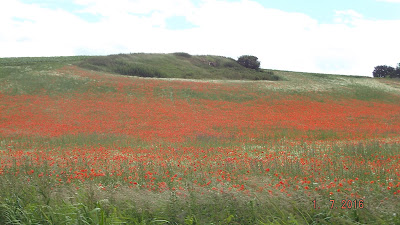 A field of poppies - a timely reminder ! 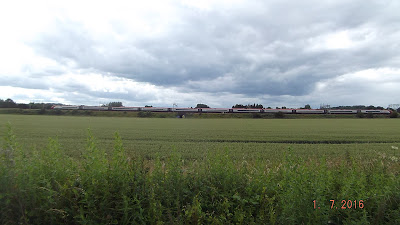 On this route, we are never very far away from the main railway line. Here an express chases past 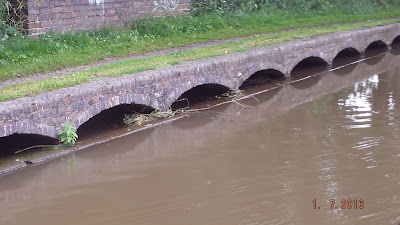 Now on the Coventry Canal 'proper' - this is a rather ornate overflow. The Coventry has no reservoir feeders and relies on water from adjoining streams and run-offs, plus some from the Oxford Canal. Hence is can be susceptible to rainfall and needs longer overflows to compensate. As can be seen, the canal is up to the maximum weir height 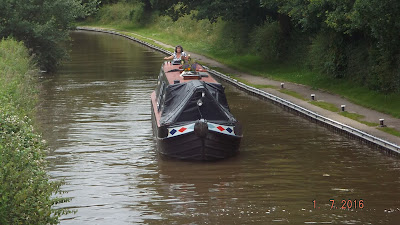 Chris approaches the bottom lock at Atherstone - just before the rain came! 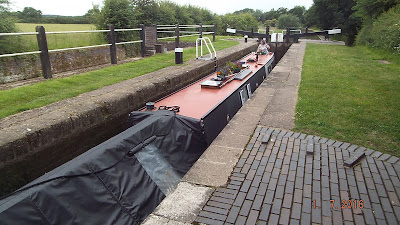 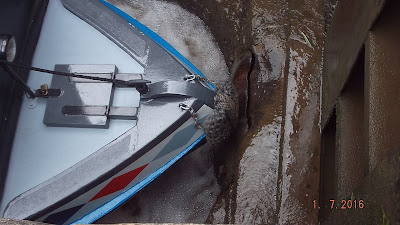 This photo shows our 'locking up' technique - putting the boat on the up running block and in tickover. This holds the boat reasonably steady to allow the lock to be filled 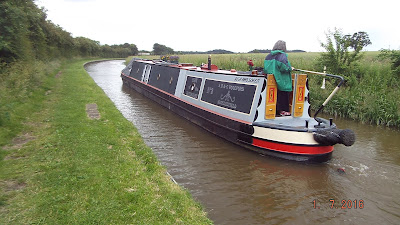 Chris steers the pound - I walk up to get the next lock ready.
(Jackets on as it's now raining) 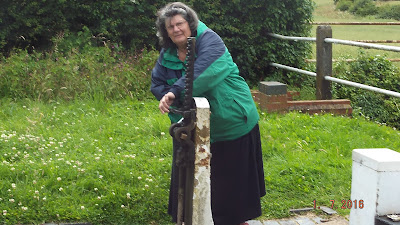 The crew happy in their work! 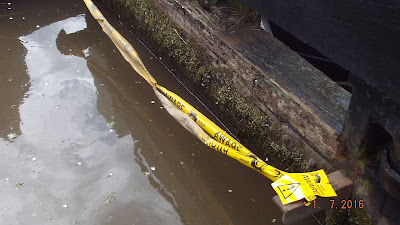 The absence of the walk board meant a step across the half open bottom gates!
I manage this OK - though how do older folk manage?