It's been somewhat of a roller coaster stay at St.Ives - weather wise, motorvan wise and holidaying wise!

Having got off the Isles of Scilly ferry, collected our luggage, gone and got the motorvan, loaded and then stopped in Tesco for some food - it was quite late as we arrived at the Caravan and Camping Temporary Holiday Site at St.Ives Rugby Club.
This is extremely well run and friendly, with easy access into the busy holiday seaside town of St.Ives. We unloaded our camping stuff (necessary to get the bed out to sleep) and covered it with a groundsheet - no rain was expected. 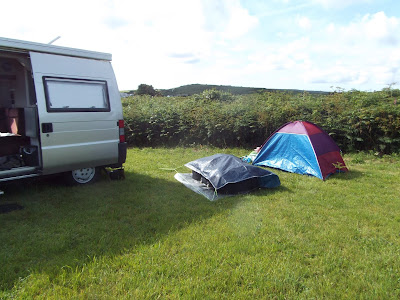 In the morning sun!
We subsequently put up our old tent to store things.
The next week, we set out for a trip to Truro. All was going well - when a loud bang signalled that failure of the clutch. As it happened, we were just on the rise of a roundabout (in rush hour with a motorist helpfully hooting!) going no-where. Chris jumped out and managed to push the motorvan over the rise and we coasted onto the Cornwall Council approach road!
It was terminal and the RAC sorted out a wagon to take us on - but to where?!
With a broken van - and nowhere to go - of course we had all our camping needs on board and a full load of food as well.
The Cornwall Council Receptionist was exceptionally helpful and arranged for us to get transported to a garage outside Truro where we could sleep the night (2 nights as it happened!) 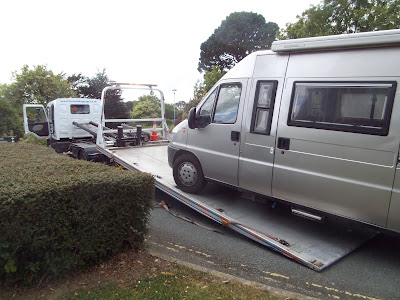 Getting loaded onto the transporter 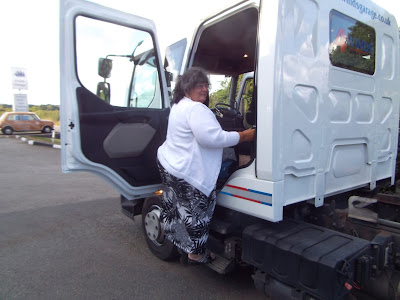 The lady takes a lift from a nice RAC man! 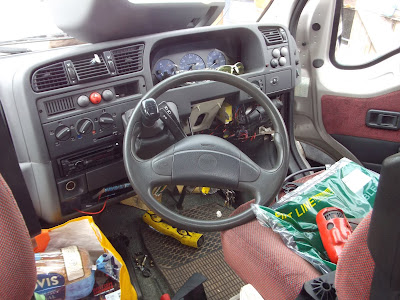 It turned out the plastic clutch pedal had snapped  - possibly due to a corroded/snagging clutch cable. These were duly ordered though to fit the new pedal, the pedal assembly needed to come off, in turn needing to remove the steering column and associated wiring.
When is was all put back, the motorvan wouldn't start as the ECU (engine computer) was disabled!! After another night we got it sorted with an
Emergency Start Up Code though all the warning lights remained on! 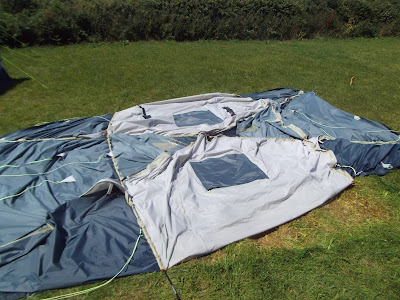 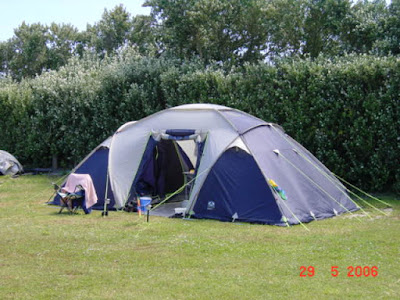 This tent has done us well, starting with us in Abersoch in 2003. Here is the first of it's three trips to the Isles of Scilly. We went to get a new tent for Daniel and Poppy!! 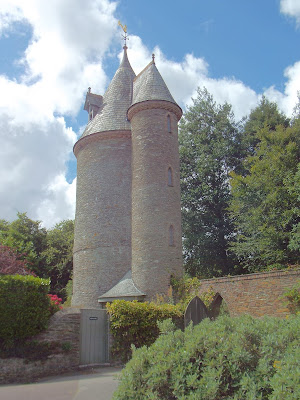 On a return visit to the garage to rectify a brake light problem and fuses - we stopped at the delightful Trelissick National Trust property for tea and cake. We walked around to the newly opened house. This wonderful Gothic Tower is, in fact, the garden water tower! 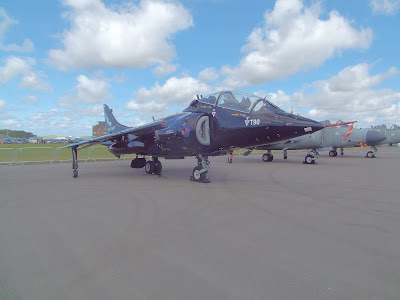 Later that week, Dan, Poppy and I went over to the RNAS Culdrose Air Day - it was a beautiful day for flying and we saw a range of heritage and modern aircraft.
As a Naval Base, they train up the next generation of aircraft carrier flight deck crew on a mock deck - here with the amazing Sea Harrier FA2 which is only allowed to taxi 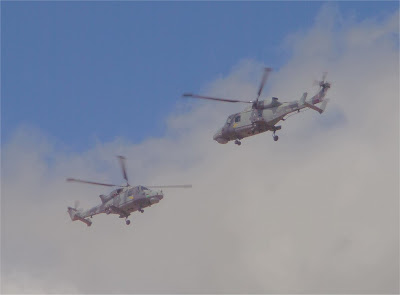 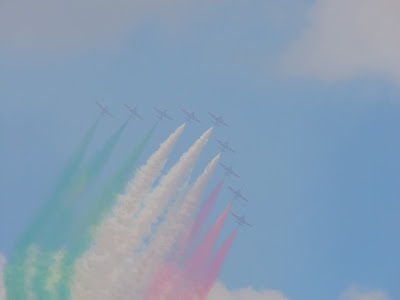 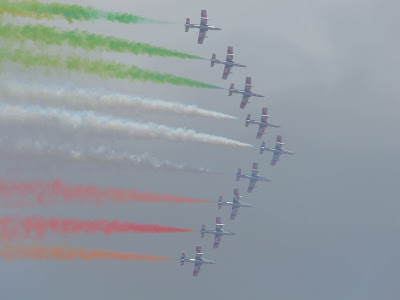 There were 10 Aermachi MB-339 PAN jet trainers in the display.
In a rather nice touch, having re-fuelled, one of the pilots set off back to Italy as his wife was soon to deliver their baby! 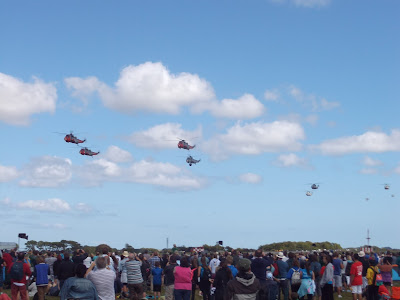 The awesome sight of the RNAS Culdrose helicopters arrive in formation 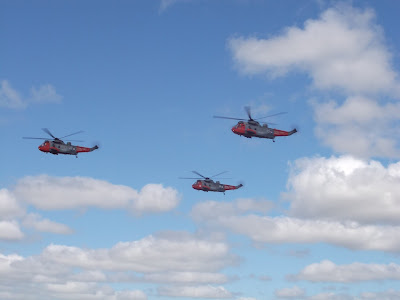 Three of the Sea King HU Mk5 of 771 Naval Air Search and Rescue Squadron.
They are shortly to be disbanded in favour of the civilian Bristows in 2016 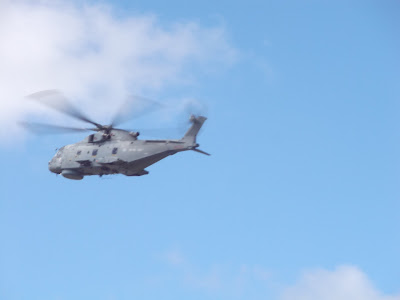 This is the operational Sea King Mk7 ASaC - Airborne Survelliance 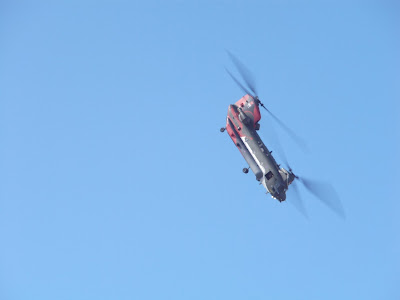 The Chinook is well known - but we've never seen it 'dance' like this! 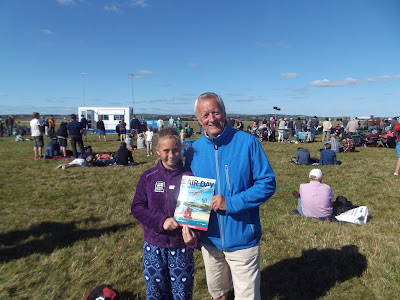 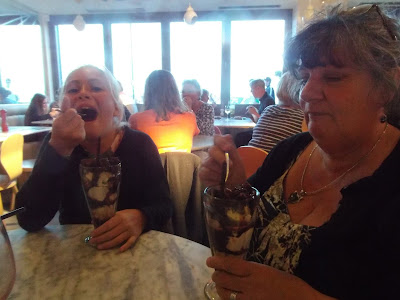 Dan and Poppy finished their holiday with a lovely meal at Pizza Express, down by the harbour - the sweet was LARGE! 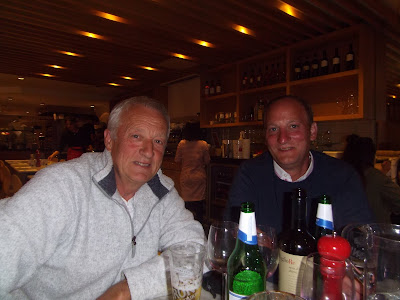 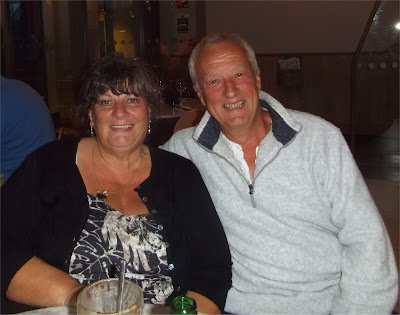 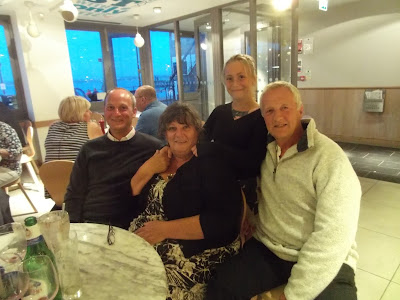 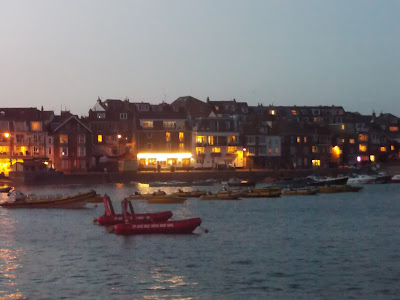