After 12 days moored on the towpath, we decided to organise our finances and book back into Overwater Marina. Originally for a long weekend - though after more discussion this will be for a couple of weeks before we set off cruising again.
The main benefit of being in the marina is the easy plug into electricity - saves running either the engine (noisy) or the gas generator (also noisy and a bit of a pain in the rain). It's also not muddy, especially given the rain we've been having.
Whilst here, I've been doing the prep and some painting - in between the rain.
The saloon top light is off and having a make-over as this can be done in the front hold.

Other activities include getting to my band rehearsals and playing at some gigs.
With Rode Hall Silver Band, we went to the Buxton Brass Contest, came 9th in our fourth section - we didn't play as well as in rehearsal so some were rather disappointed. 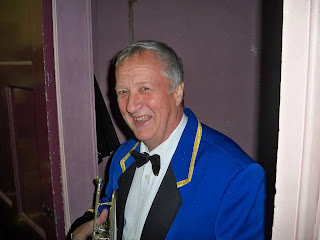 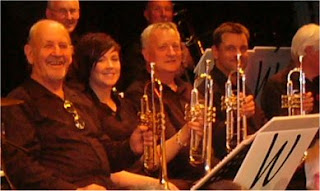 The above pic is our trumpet section with the Wychcraft Big Band
Going﻿ back to the benefits of the marina - it makes it slightly easier for visitors to park up and get aboard.
We've had the Men's Group (7 of us) in the saloon, my brother and partner for a vist, our daughter from Lisbon stopping over for a night, our long standing friend from Bollington Wharf came over and our son from Staines stopped over for the weekend.
Main focus now is preparing the boat to travel again next week in between some banding jobs this weekend.
Posted by Unknown at 01:59