Birmingham: Lots of Locks – Down!


By our standards, this was an early start at 8am, though not before the 'Book Boat' from the Pelsall Festival passed us – single handed.
We arrived at the Longwood Junction behind him and helped him down the top lock, when a boater by bike arrived up from the lower pounds – there was no water in pound 3 and 4  boats stuck going down.


By now a Canal Trust man had appeared saying he had only started at 10am (it was 10.45!) and they set off on the wagon to sort things out.


I let some water down and followed the Book Boat along the long pound to lock 3.


Then we grounded! With at least 5 boats ahead, the pound had been lowered by about 12”. The younger Canal Trust worker said there was 2'6” depth – not helpful with a 2'9” skeg! He had been back up to the top to let more water down though and we edged through the next few pounds until the levels were OK. 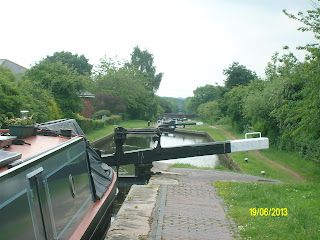 
It was a pleasantly hot day and good humoured, with boaters helping one another, as the procession lowered the 85ft (11 locks in all) to Rushall Junction. Here we encountered the concrete roads in the sky – motorways, which cross the canal system on this NE edge of the BCN. 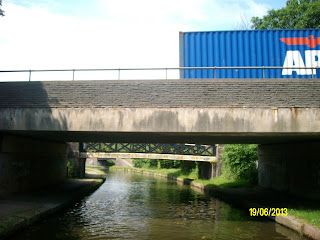 
This next canal is the Tame Valley, dead straight and delightfully rural, set alternatively on a high embankment and in a deep cutting – no boats to be seen! Built late in the canal age in the 1846, it acted as a by-pass to the climb up through Birmingham. 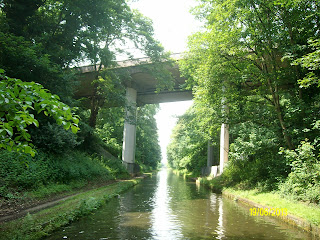 Looking back (and up) at Scott Bridge and the straight canal 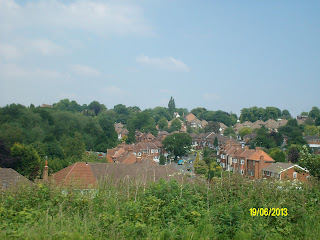 A view over the housing estates 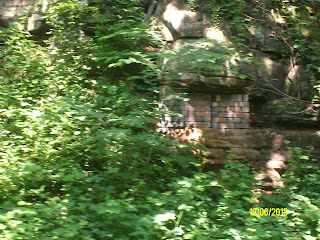 Bricks propping up the sandstone crags


We soon encountered the Perry Barr Locks, dropping some 106ft in 13 locks, spread out over 2 miles or so. It was hot work, helped by the boater ahead opening a paddle to fill the next lock for us – thank you! 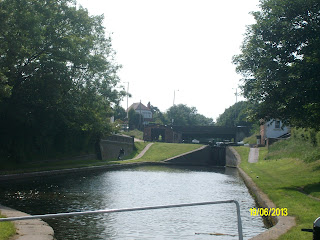 Looking back up at the Top Lock 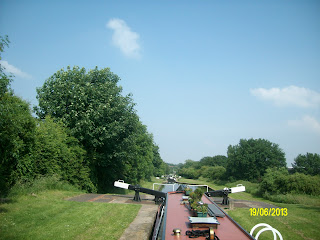 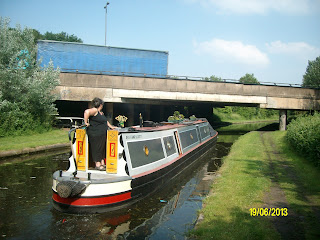 Chris steers under the M6 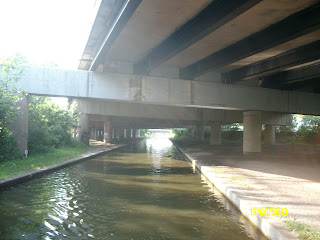 Overall, we have been pleasantly appreciative at the depth of water and the general cleanliness of the canal. A couple of places have been grotty – one such here where the wind blows the debris to the lock. I put the keb (bend rake) to good use to clear a bit more onto the pile! 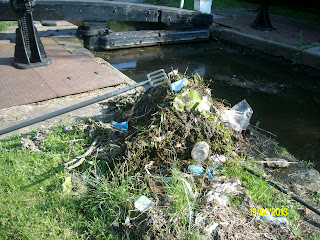 Not a pretty sight! 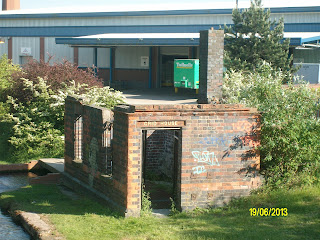 The Grid House – used to pump water back up to the top [can't find anything on the internet about it?] 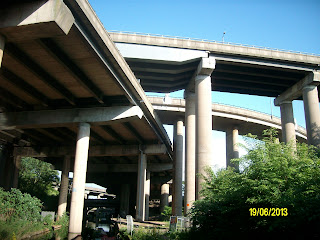 Under the M6/A38 Spaghetti Junction


We turned at Salford Junction up the Birmingham and Fazeley Canal, taking an overnight berth at the Canal Trust's Cuckoo Wharf. A long though very pleasurable day!