We joined with the Owners' Club for our Murvi Motorvan at the AGM Meet in Hope, nr Castleton, Derbyshire. For us, this is a relatively close rally! 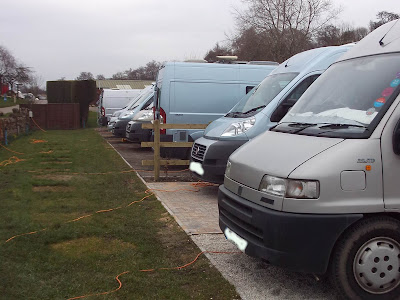 Three of us took advantage of the location and a glorious day to walk up onto Kinder Edge.
In order to maximise walking on the fells, I chose to take the train from where we were camping at Hope west to Edale - just the one stop. 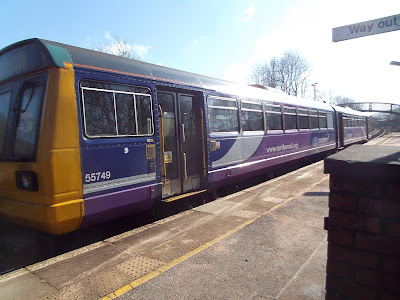 The train from Sheffield, calling in at Hope - just one stop to Edale 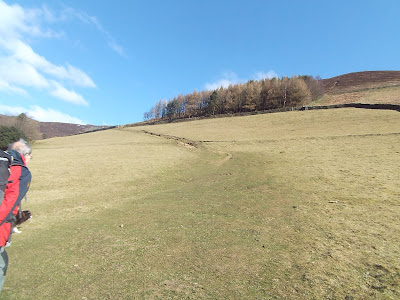 Setting off uphill from Grindsbrook Booth - and yes, it's gets steeper! 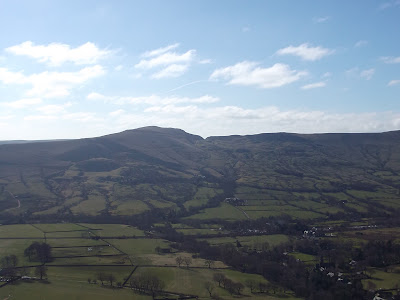 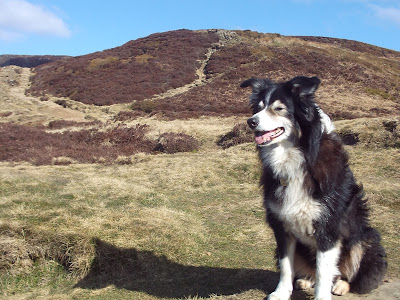 Missy joined us on the walk! 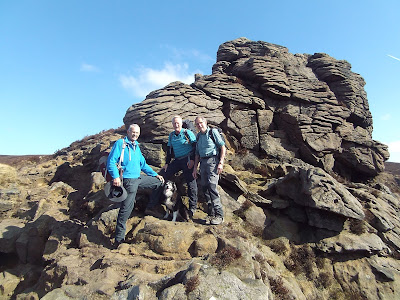 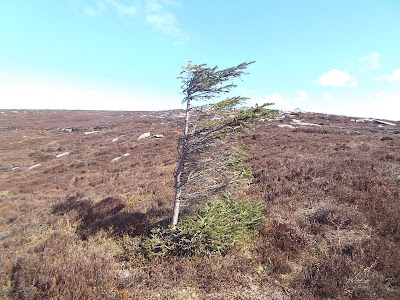 A windswept xmas tree - blasted from the prevailing westerlies 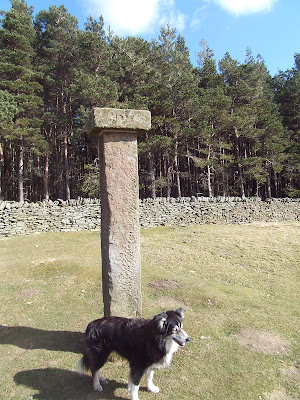 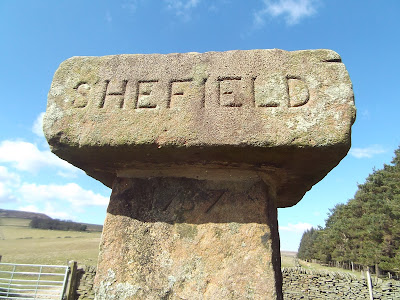 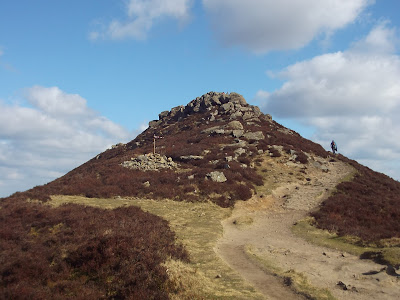 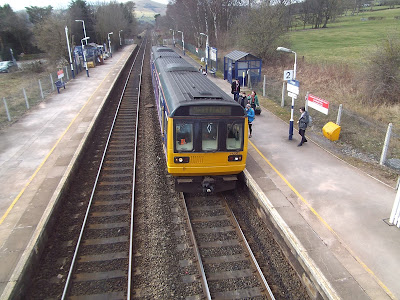 Our Lister JP2 Marine Engine has a brass rod diesel control system.
This brass rod was worn when we go the engine in 2000 - so time for renewal. 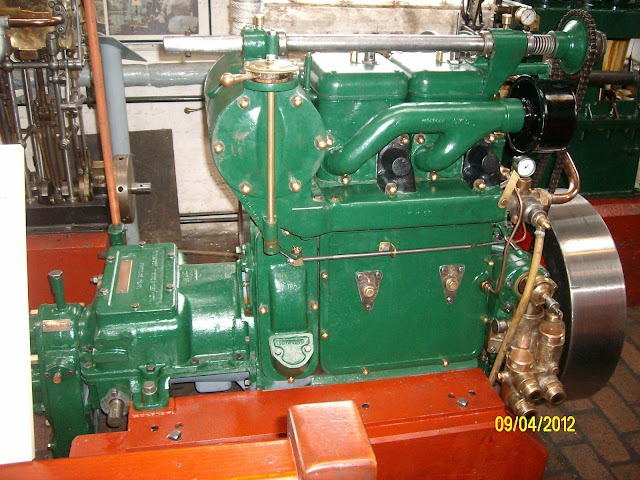 This is a re-built Lister JP2M at the Ellesmere Port Boat Museum.
As you can see it dates from 2012 and shows the horizontal brass control rod running from the vertical arm, forward. The brass rod is supported/restrained by a bracket halfway along - it is this bracket that is causing the wear 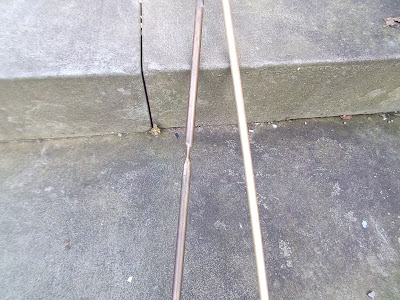 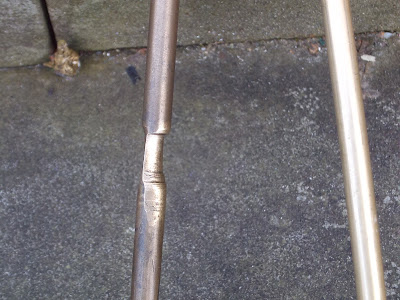 A further view of the worn bar! 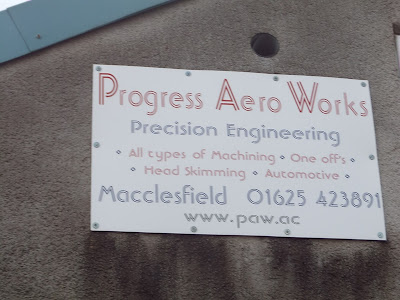 I use this Engineering Works to help me - the Engineer did the job in the day! 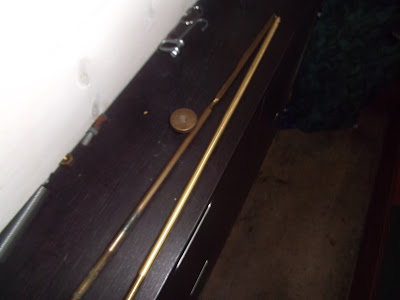 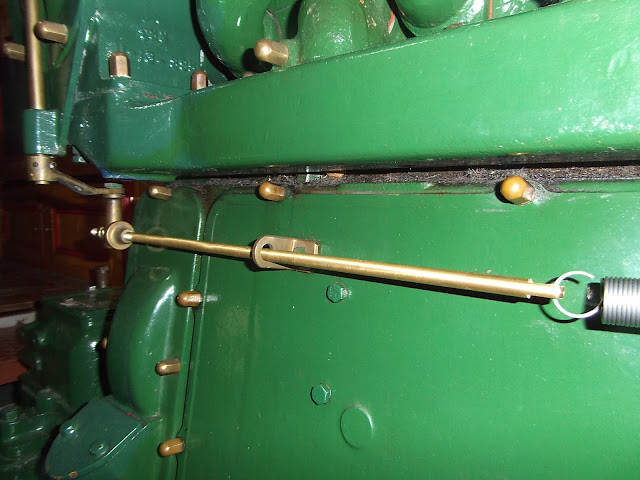 The new brass control rod fitted - complete with the new spring.
The adjustment bolts are on the left-hand end and will need a touch when the engine next runs. both cold and hot.
A job well done!

One of my regular jobs in the engine room is to check and maintain the battery bank.
I use the more usual 'wet' lead acid 110 amps hour batteries for our leisure-side; we have 6!

I check the levels of acid and fill with distilled water where necessary. This appears to often be the case after a period where the charger has worked hard to bring the batteries up to the 13.7 volts level. Putting in 60 to 70 amps up to 14.8 volts appears to lessen the levels.

These batteries are now about 5 years plus old - so are doing quite well! 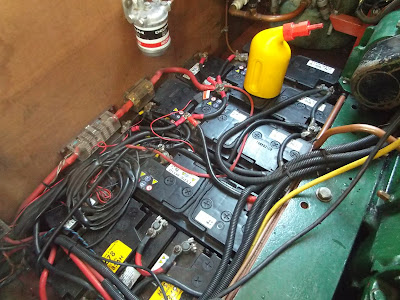 With 6 x 12v leisure batteries, there is wiring everywhere!! 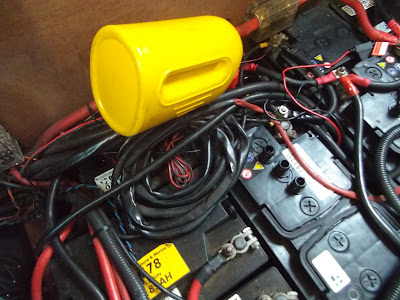 More topping up of the electrolyte levels - using distilled water 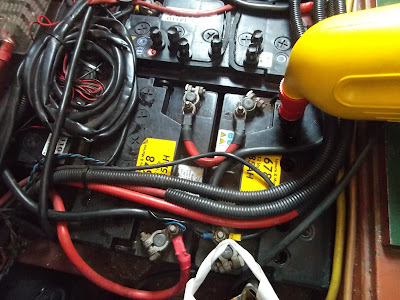 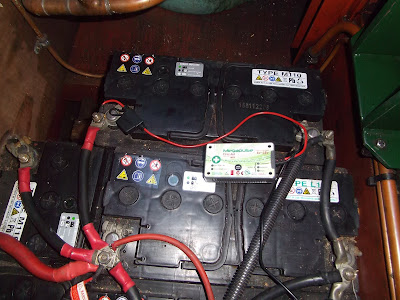 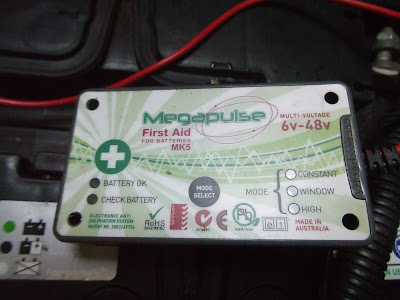 Showing the front of the 'MegaPulse'. This piece of electronic kit originates from Australia and is apparently used by their forces and emergency services.
Basically it checks the batteries and sends a micro-amp pulse across the terminals to de-sulphate the lead plates. Hence prolonging battery life!
Seems to work as we have had this set of batteries since Winter 2010 - admittedly we have been on hook-up for much of that time! - but, hey, extending battery life can't bad!
Incidently, I also used one of these on our motorhome leisure batteries 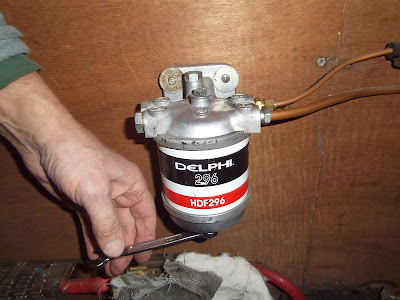 Last job whilst on this side of the engine - releasing any residual water from the in-line diesel filter for the Webasto. Happily, all is clear!

The last time our JP2 was looked at was in May 2011 for a check by Adam from PB Mechanicals in Chorley - Leeds and Liverpool Canal.
This was at 390 engine hours and since then we have had some longer cruises and are now at 1390 hours. The JP2M is a re-built marine version with new pistons and re-metalled bearings.

This summer 2016 we are heading down the Grand Union to London and onto the River Thames, so an engine maintenance check is in order.
Richard of A. R. Milligan Marine Engineering was recommended by a fellow moorer here at Overwater Marina. He has a JK3 and is very pleased with Richard's service.

I wanted a general check over, particularly the tappets and the slow running - and anything else spotted?! 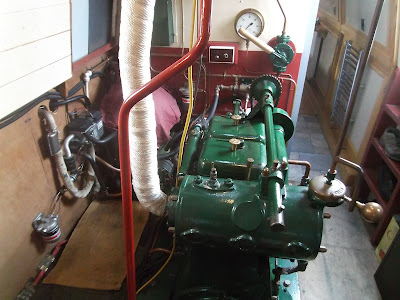 Engine room cleared of ropes, coats, boots etc, ready for the work!
You can see the JP sitting in it's own engine room - the dial ahead is the oil pressure, partly obscured by the day tank rotary pump handle which draws diesel through from the main aft tank to the day tank.
On the left is the Webasto Central Heating Boiler, also running on diesel, with it's own filter 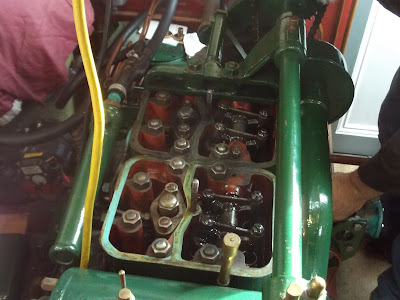 Here the two rocker covers are removed to adjust the tappets - no.2 was definitely out 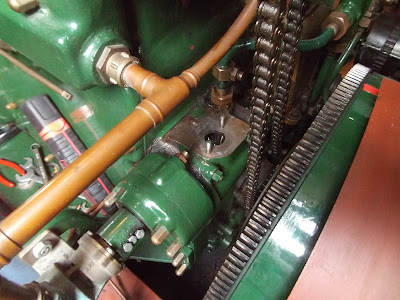 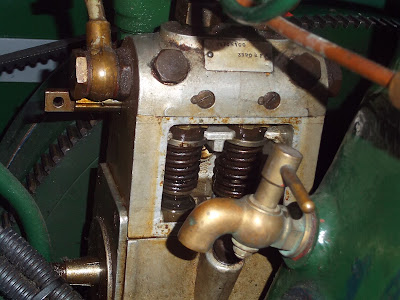 A view of the injector pump with the side access plate removed. Plenty of WD40 was sprayed in and the control rod cleaned, then oiled 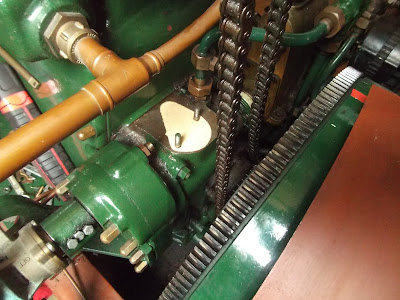 A new gasket is cut and replaced 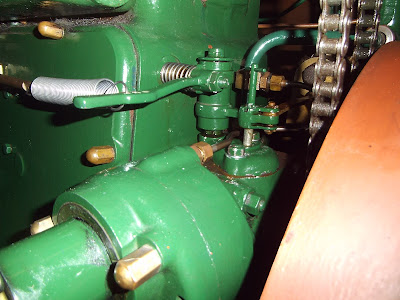 Showing the Diesel Control Spindle - complete with the two new tensioning springs.
In the foreground is the water pump gearing 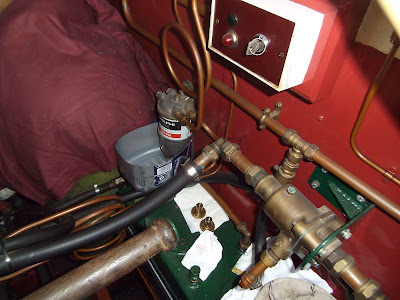 Last job was to renew the diesel filter. The old one turned out to be quite clean as it happens - which is good! Helped by the day tank pump drawing fuel from the main tank when settled in the morning.

We then ran the engine - it sounded sweet and Richard set the idler, albeit the engine was still rather cold as it takes quite a while to get hot.
We had a discussion about the correct running temperature so more thought there and a smart brass temperature gauge maybe - work for the future.