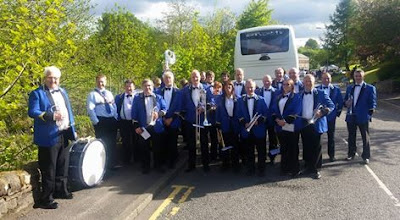 One of my favourite Rode Hall Band events is going up to the Saddleworth area for the Whit Friday Marches competition.
We had a good and full band this year, ably led by our MD Nigel. I have been playing my cornet on the 'front row' at the 4th position - called '4th man down'!
We played 'Castell Coch' in the competitions this year, a reasonably difficult march for the cornets - though for the actual marching we stuck to the much simpler standard of 'Slaidburn'.
Our Silver Band boarded a coach bound for Saddleworth to take part in these annual Saddleworth & District Whit Friday Brass Band Contests. The contests are also known as ‘The Greatest Free Show on Earth’ because around 100 bands from all over the country, and beyond, travel from village to village playing two marches at each contest to both a ‘blind’ adjudicator and an appreciative crowd, before boarding their bus and moving on to the next village. Each contest typically hosts between 50 and 70 bands, from non-contesting to world class bands.
This year Rode weren’t able to perform at as many venues as previous years, due to congestion and queues at the venues, however we did manage to achieve our minimum target of six contests. These were Diggle, Uppermill, Dobcross, Scouthead, Lydgate & Denshaw. The band are particularly proud of their second place prize in the 4th Section at Lydgate. The weather was pretty cool all evening, but dry until our very last performance at Denshaw. As we watched the penultimate band perform, the heavens opened. Torrential rain turned to an onslaught of hail stones as our band played on to a handful of equally plucky spectators. As the last band of the contest, we brought the contest to a close with a soggy National Anthem. 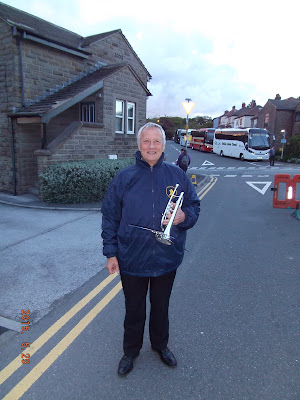 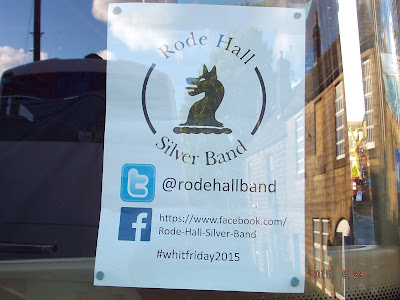 Our poster on the front of the coach 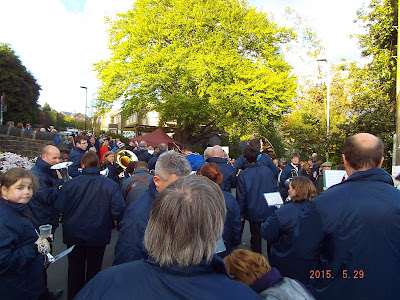 Getting ready at one of the venues 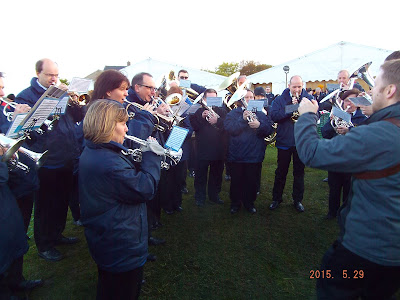 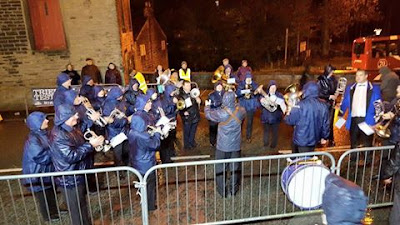 At Denshaw, at midnight! In a hailstorm !!